In 1995 I published my first book 'Chains Unbound: Slave Emancipations in Greenwich, Connecticut.' My original intention was for it to be used as an educational resource. This is an online companion site that I've created, especially for those of you utilizing online resources and smartphones. I've also included additional items and news articles not found in the 1995 edition. Jeffrey Bingham Mead, Historian and Author. October 13, 2014.

State of Connecticut Fairfield County ss In Greenwich
This may certify that application has been made to us the subscrib-
er Justices of the peace in and for Fairfield County by Benja-
min Woolsey Lyon of said Greenwich expressing his desire to emanci-
pate and make free his negro girl Peg. And according to the Statute
Law of this State, entitled "An act in addition to and alteration of
an act concerning Indian, mulatto and negro servants, and Slaves."
We have enquired, examined and find the said Peg to be a healthy
person and between the age of twenty five and forty five years of
age, and have personally examined the said Peg who wishes to be made
free and emancipated as aforesaid. We therefore certify that
the said Peg is a proper person to be made free and emancipated
agreeable to said Statute Law. Given under our hands and test of Office
this 12th day of April Anno Domini 1800.
Jabez Fitch  Justice of peace
Ebenzr Mead  Justice of peace

Know all men by these presents that on receiving the above certi-
ficate I the Subscriber Benjamin Woolsey Lyon of Greenwich in the
County of Fairfield and State of Connecticut Do hereby give, grant,
emancipate, make free and set at liberty the said negro slave Peg
free and clear from me and my heirs and from every other person or persons
claiming her from or under them. And from the date hereof said Peg
is permitted to go her own business. In witness whereof I have hereunto set
my hand and seal the 12th day of April Anno Domini 1800.
Signed, sealed & delivered                                    Benjamin W. Lyon    L.S.
Ebenzr Mead

Rec'd to record April 12th AD 1800
And recorded by me Jabez Fitch  Register.
Posted by Jeffrey Bingham Mead at 7:34 PM

Newer Post Older Post Home
Subscribe to: Post Comments (Atom)
"That freedom is the sacred right of every man whatever be his color, who has not forfeited it by some violation of municipal law, is a truth established by God himself in the very creation of human beings. No time, no circumstances, no human power or policy can change the nature of this truth, nor repeal the fundamental laws of society by which every man's right to liberty is guaranteed."
Noah Webster, 1793
The Effects of Slavery on Morals and Industry
Hartford, Connecticut 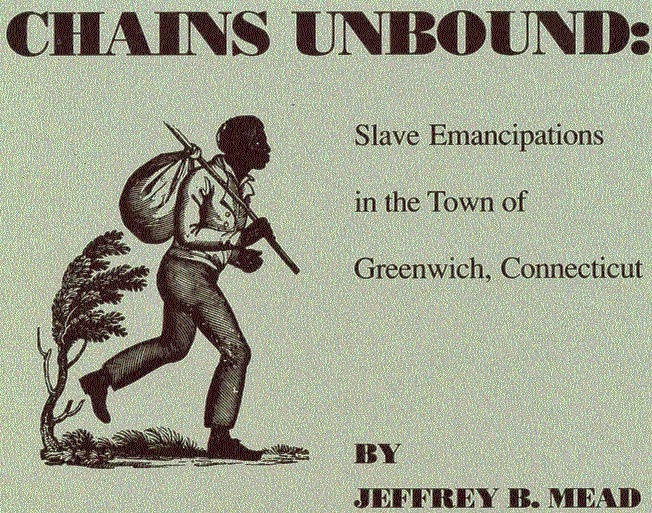 Jeffrey Bingham Mead
Hi everyone! I'm Jeffrey Bingham Mead. The world is my pearl, so to speak. My ancestral home is Greenwich, Connecticut USA. I also maintain a home in Hawaii, using this location to travel and explore Asia. My background is in education, and I'm certainly a lifelong learner. I'm an historian, business owner, writer in a world in which things are changing. People and cultures are coming together as never before. Traveling in this era surely rocks my world, and so I hope my stories and narratives do the same for you, too!